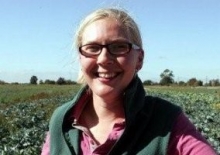 “You have to believe in organic food production and be able to follow it through. That means thinking about how to sell the vegetables, as well as grow them.”

Sarah Green’s family-run farm in Tillingham in Essex is an organic farming success story. Over the past seven years she has built up supplies of organic vegetables to box schemes, farm shops and farmers markets.

The fortuitously named Sarah Green grew up on her family’s farm on the Dengie Peninsula, right by the coast in Essex. Surrounded by flat marshes and big open skies she fell in love with the area and the way of life. But when she wanted to work on the farm herself, her parents said there wasn’t room. They thought they just couldn’t earn enough from their family farm to support her.

It was while Sarah was at agricultural college that the idea of growing organic vegetables developed. No other farms in East Essex were doing it, so the family thought there could be a gap in the market and Sarah’s mother was a greengrocer so they knew they had an outlet. The family put land into conversion  and seven years on the farm has switched from growing solely cereals and main crop potatoes to include a year-round supply of organic vegetables on 30 acres of organic land.

Getting an income from box schemes and direct sales means that more money ends up with the farmer than the supermarkets and it has boosted the farm’s earnings. “Setting up box schemes ensures everyone involved gets a fair price,” says Sarah.

Sarah works in partnership with both her parents, dividing up what needs to be done between themselves and a gang of workers.

With the farm being organic, they can’t use chemicals to kill weeds or insects. But Sarah doesn’t let the bugs get her down.  “Farming’s always a challenge,”she says. “You always have something to grumble about. The biggest challenge all farmers face – organic or not -- is the weather.”

Wildlife thrives in the more natural habitat of an organic farm and a recent bird survey spotted some 52 different types of birds over a 12-month period, including skylarks, barn owls, tawny owls, little owls, kestrels, buzzards and sparrowhawks.

The hardest part for Sarah is keeping up a continuous supply of vegetables. They harvest all year round so the vegetables are fresh for the boxes and they are literally, picking to order. That’s cold, hard work in the winter. Last December the ground was frozen for two weeks so they couldn’t get crops out.

And it’s the tough physical work that keeps Sarah in a minority as a woman farmer. “Yes it is unusual,” she says. “I know of girls who work on farms and there are hands-on-farmer’s wives, but it is unusual.”

Still with her faithful dog by her side, Sarah can join her parents and look out with satisfaction over fields full of organic seasonal vegetables – knowing that the family farm is safe in the hands of a third-generation of Greens.