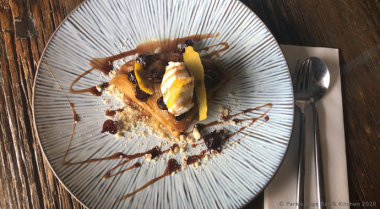 Indulge in a dessert that elevates the British pear to a new level. Serve your tart with drizzled Gooseberry Gin Coulis and mascarpone or vanilla ice cream and enjoy it! ​

Step 1: Peel and core the pears and cut as neatly as possible into quarters. Wash the gooseberries and leave to drain.

Step 2: Place the sugar, butter, cinnamon, star anise and cardamom into a heavy bottomed non-stick frying pan (that can also go in the oven) over a moderate flame. Stir until gently bubbling. Shake the pan and stir until the sauce separates and the sugar caramelises to a darker brown colour.

Step 5: Focus on arranging the pears in a fan shape with the thin points of the quarters at the centre of the pan. Spoon out approximately half of the sauce mix containing the gooseberries (including the cinnamon stick, cardamom pods and star anise) and distribute the rest evenly throughout the pan.

Step 6: Drape your pastry over the pears and gooseberries and tuck the edges down the side of the pan.  Pierce the pastry in different places a few times.

Step 7: Bake in the oven for 15 mins. If a lot of juice bubbles up, pour it off (but set aside as it can go back into the gooseberry mixture in the pan). Reduce temperature to 180 / Fan 160 / Gas mark 4 and bake for a further 15 mins until the pastry is golden brown. Leave to cool for 10 mins and then invert carefully onto a serving plate.

Step 8: Pour 50 ml of good quality gin (or a flavoured gin such as elderflower or rhubarb) into your leftover gooseberry sauce. Heat gently and stir. Extract the cinnamon stick, cardamom pods and star anise.

Step 9:  Sweeten the coulis to taste if needed. Pour over the tart and serve.